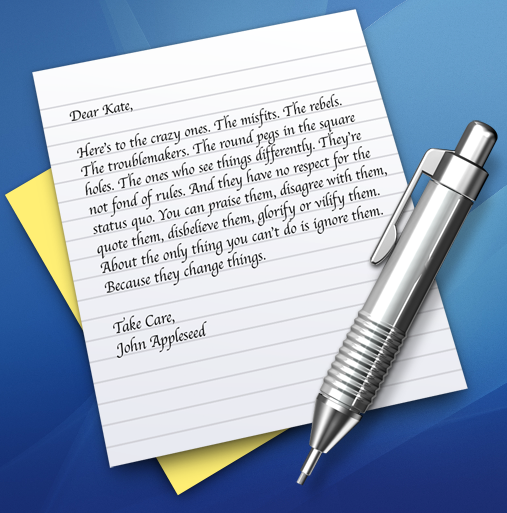 It seems as though we’ve lost sight of the fact that it can be a compliment to be considered crazy.

When I feel a little odd, that my ideas don’t quite jive with others around me, I find myself in the words of Apple’s Think Different campaign.

I’ll tell you what, I’m proud when someone calls me crazy! They remind me that I can change the world. They honor me by putting me among the crazy people I admire most… Jim Henson & Kermit the Frog (it’s not easy being green!), Thomas Edison, Albert Einstein, Amelia Earhart, Martin Luther King, Jr., Bob Dylan, John Lennon, Miles Davis, Alfred Hitchcock, Gandhi, Pablo Picasso, Ansel Adams, Frank Lloyd Wright, and yes, even Richard Branson and Seinfeld.

Here’s to the crazy ones…

“Here’s to the crazy ones. The misfits. The rebels. The troublemakers. The round pegs in the square holes. The ones who see things differently. They’re not fond of rules. And they have no respect for the status quo. You can quote them, disagree with them, glorify or vilify them. About the only thing you can’t do is ignore them. Because they change things. They push the human race forward. And while some may see them as the crazy ones, we see genius. Because the people who are crazy enough to think they can change the world, are the ones who do.”

Yes, I’m crazy. I was raised that way… I blame my mother, and Jim Henson. Momma taught me to think different—and man, oh man, is my momma crazy! Jim Henson stepped in where my daddy would have been—he taught me different is good. Daddy would be proud.