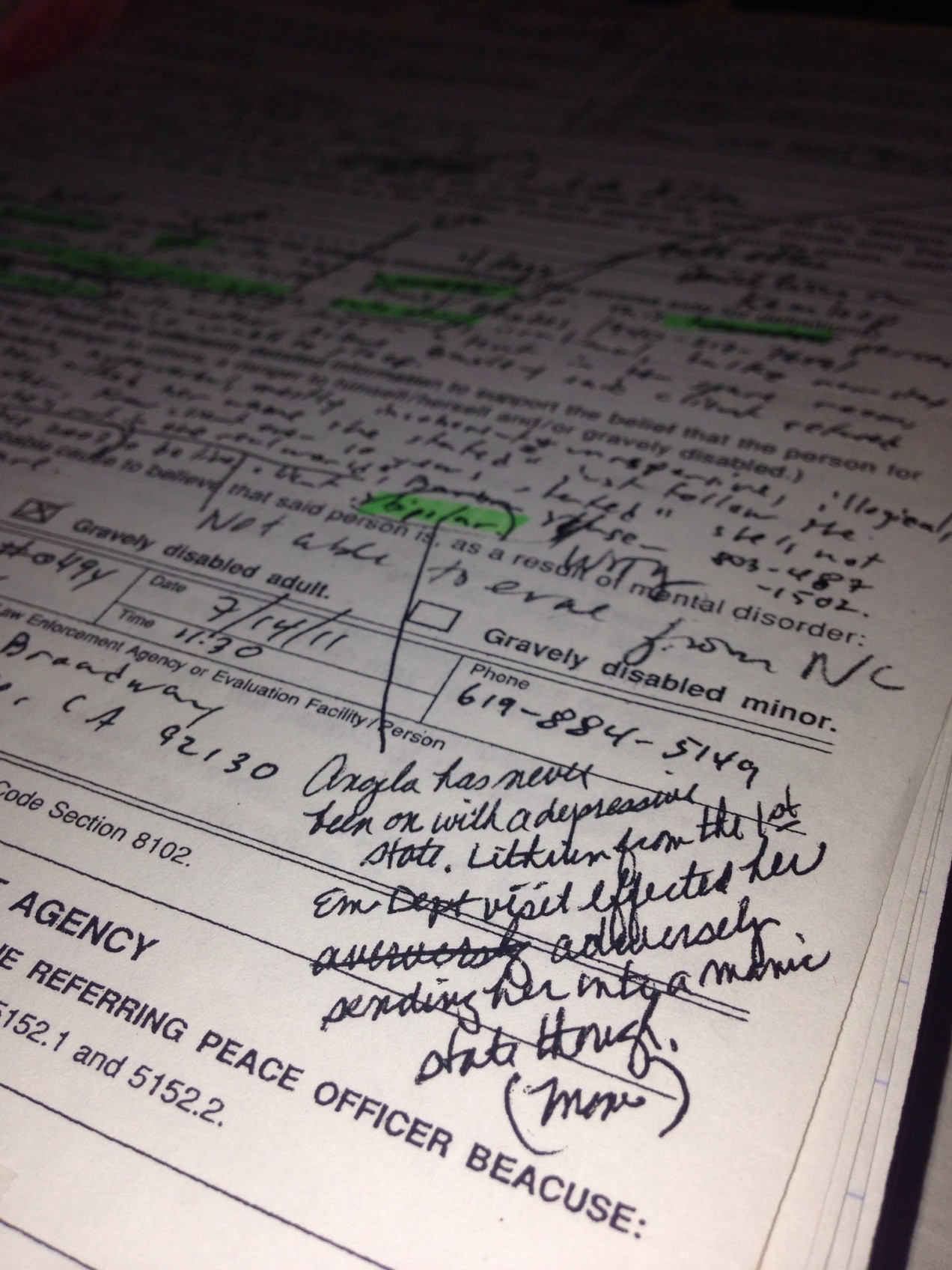 Read along as I explain what happened the summer of 2011…

I’m taken in handcuffs, held and drugged against my will. I was released the next morning.

I was again taken, drugged and held against my will.

It is important to note that the paperwork refers to my “mother” who put me in—this is a lie. When my mother found out that I had been institutionalized and immediately bought a ticket to California to rescue me. See also my parents documentation regarding the events, notations regarding timelines and deceptions…

They refused to release me to my mother.

I was held until July 19, 2011 and released by the hospital “against recommendation” just prior to my case being heard by the judge. I was too tired to wait to see a judge to have my ‘case’ heard. So I accepted their offer of release ‘against their recommendation’ instead of waiting and taking my chances with the judge… at that moment being free was more important that exposing injustice. 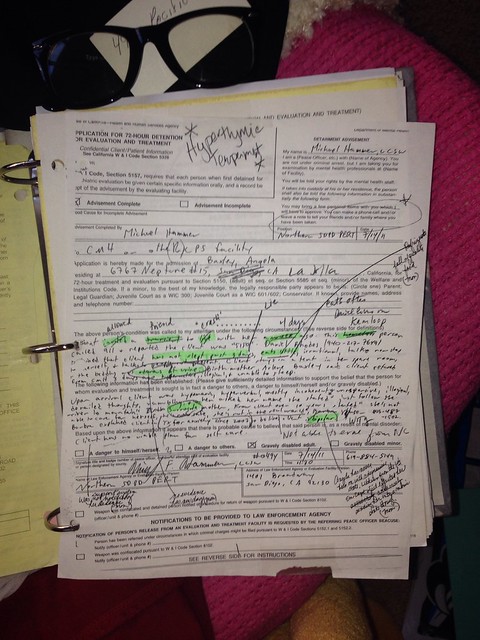 The above person’s condition was called to my attention under the following circumstances:

“bedding odorous of urine”: no evidence has new dog (Mom)

Determined that client has not slept in past 3 days, eats little, irrational, talks non-stop to herself, & talks to people not present. Client stays in a tent in her spare room, & the bedding was odorous of urine. Birth mother, Arlene Baxley said client refused from CMH 3 days ago. Hyperactive, illogical and unable to sleep.

The following information has been established: (Please give sufficiently detailed information to support the belief that the person for whom evaluation and treatment is sought is in fact a danger to others, a danger to himself/herself and/or gravely disabled.)

Upon arrival client was hypomanic, hyperverbal, mostly incoherent & unresponsive, illogical, derailed thoughts, rambling, when asked her name she stated “just follow the river to the mountain.”  Surrogate mother, knew client over 10 years stated “She not able to care for herself, she’s not safe, she’s not in the real world”, Barbara Yager, 803-487-1502. Barbara explained client in TX for anxiety since 2007 believes client is bipolar.

Based upon the above information it appears there is probable cause to believe that said person is, as a result of a mental disorder:

Client has no viable plan for self care.

support system was not notified of her release (Mom)

You can make a phone call and/or leave a note to tell your friends and/or family where you have been taken.

Bringing Down the Hammer

What does it matter that if a person is transient or not when it comes to determining the case? “Daniel” has a driver’s license with a respectable address, is known in the neighborhood, and it’s simply Hammer’s judgmental attitude showing immediately in the documentation when he calls the person reporting a “transient”. (That’s “Daniel” photographed below.) 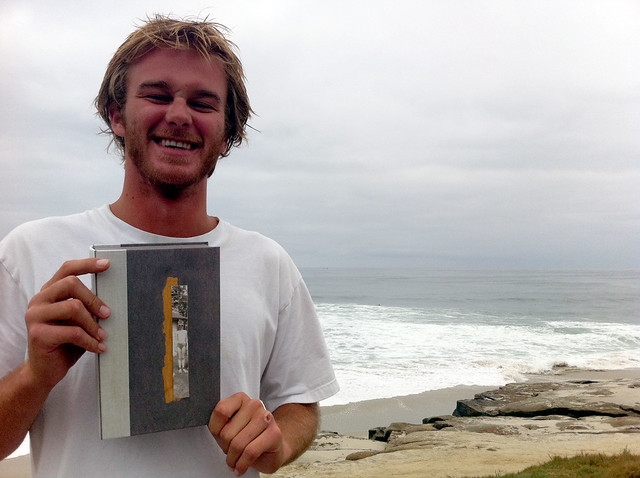 He’s not Happy, He’s my Brother… the “transient” “homeless person” who lived with me.

Likewise, you can’t say I invited him to live with me, and then call him homeless. As a matter of fact, he lived with me until the end of the summer. You see, after getting out I made sure I wasn’t going to have been punished for inviting a transient homeless man live with me and not actually have him live with me!

has not slept past 3 days

At this point it should be pointed out the confusion between Hammer referring to my “birth” mother and a “surrogate” mother, both individuals he refers to being in North Carolina, and thus says who, the homeless transient who lives with me? Meanwhile, ironically, not sleeping had everything to do with having been drugged against my will on July 9th, 2011. 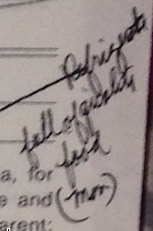 My mother notes that I had a refrigerator full of food.

I had a friend, Lea Dennis, prepare some amazing food (see below) which stocked the refrigerator.

I’m also known for my routine coffee—and occasional pastry—at Bird Rock Coffee Roasters, to be followed by brunch at a diner, like Harry’s or Cass Street.

I plan my day around food.

Should I have to prove that I eat enough food so as not to be institutionalized? Whose right is it to judge me?—and on what days? To come into my home, and to take me away, and to hold me, and drug me, against my wishes? 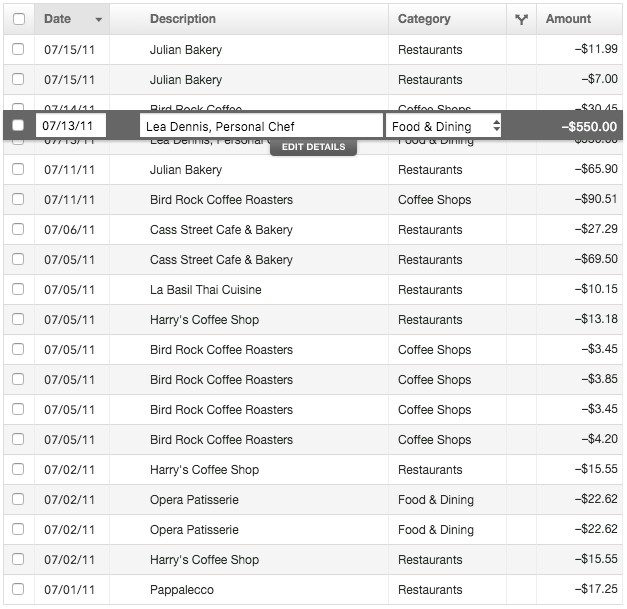 I don’t have a surrogate mother.

Angela has never been in a depressive state. Lithium from the Em Dept visit effected adversely sending her into a manic state though. (Mom)

So July 2011 overnight on the 9th, and from the 14th through the 19th I was held in mental institution under the recommendation of someone who called 911 from North Carolina about a person in California. This person was not my mother—my mother flew to California to rescue me, but San Diego County Psychiatric Hospital refused to release me, even to my mother’s care.

On July 19th rather than allowing me to see the judge they planned for the “AMA” release.

That’s my dog Roxie. I got her back, but we were only together for a few days before she died—run over before my eyes.

The cops would come to my door one more time that summer to threaten to take me away. 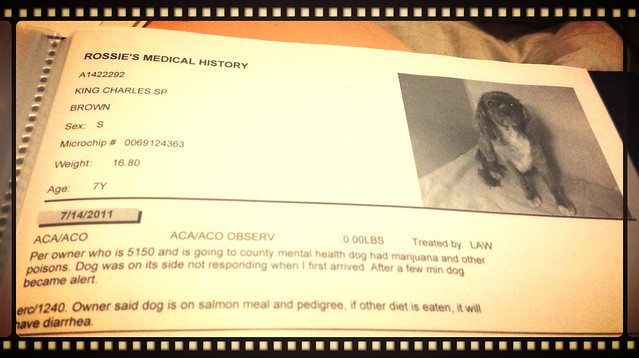 “Pet owner who is 5150 and is going to county mental health dog had marijuana and other poisons. Dog was on its side not responding when I first arrived. After a few min dog became alert.”

They tested her for drugs twice failing to find any evidence to substantiate Mike Hammer’s report. Roxie wasn’t unresponsive on her side when he arrived—she was resting in my lap. Hence, see, trouble: I was unable to allow Mike Hammer into my home, as I was sitting on the couch with my dog asleep on my lap… so, let’s talk about due process.

5 thoughts on “The Hammer”