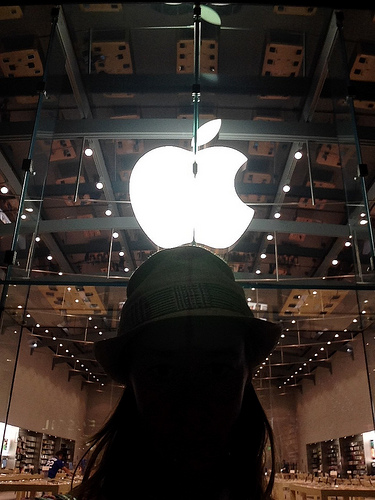 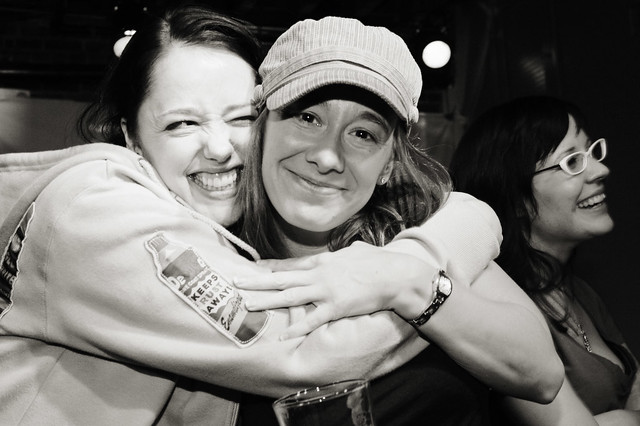 It’s incredibly exhausting to be happy all the time.

People just don’t get it, and that means you end up in a state of performance for a good portion of your life.

“All the world’s a stage, and we are merely players.” 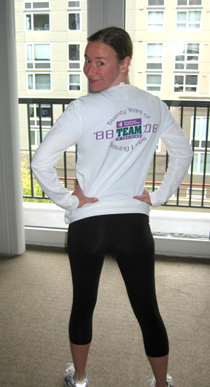 I look back and recall Brian being upset because he didn’t get the same spunky Angie that others did. We shared the private intimate space of a couple, and thus he really knew me.

Why did I leave Microsoft?*

Because my manager was found guilty of sexual harassment on multiple accounts: one of which was harassing me, another was of harassing a girl who worked on our team after I had (in the end with the help of another female co-worker/manager on the team) shut him down.

* Edited to stop protecting the not so innocent. I’m sorry Mackenzie. I should have realized it wouldn’t have been just me.

How did it happen?

Gump asked me to report to “The Brit” in the “new org”. Professionally, I found The Brit brilliant. But I told Gump I wouldn’t be comfortable, and kept my mouth shut about why. I don’t know why he waited so long to push for why, but for weeks the “new org” was held up apparently by me.

Eventually Gump pushes and I explain how he made me feel uncomfortable, which was tolerable as a peer, but I couldn’t report to him since it was already a problem. I recall mentioning how my mother would look at the situation, and then feeling embarrassed for raising my mother’s perspective in defense of my own.

That’s where Gump then explains to me about European culture set against our American (puritan) cultural backdrop. I was insulted. I had traveled to Europe, and I had already run from European rapists.

Gump said he’d send The Brit to “sensitivity” and “management” training classes, to make him U.S. Corporate Office ready, and let me work from Rome with UW over the summer.

You’ll find it ironic then that the man who then reported that The Brit was harassing me was also from the U.K.

My friend walked into my office and caught something on my screen in an email from The Brit.

Microsoft found The Brit guilty, but also, on the same report, found that his harassment did not affect my performance. How is that even possible?!—I’m not Super Woman.

That was that—just keep working and ignore the guy on the other side of your office wall.

I never asked for a raise at Microsoft.

“Angela left and went to Yahoo!”

My new manager told me it was SxSW or my job.

Bam. That was my first year at SxSW.

So I got a job, a raise, and left Microsoft and Seattle—Yahoo! 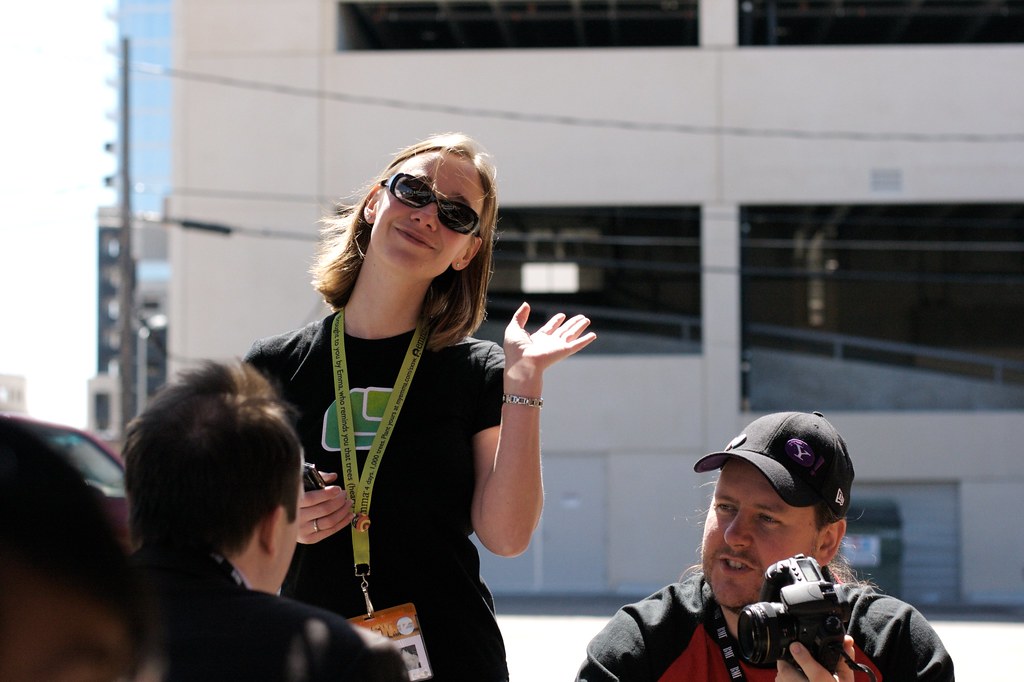 And now you know the rest of the story.

Brian would have been the only person to see me slip from Angela, the “Spunky Gidget”, to one given to hypomanic states induced by psychoactive drugs, namely Clonazepam.

Unfortunately, he had a perspective of the unfairness. Like life was playing a cruel joke on him. They got the girl, and he got what was left over. I left Microsoft, Seattle, and the great Pacific Northwest that I love for San Francisco.* More sunshine, more freedom, and a future. Unfortunately the bottle of Clonazepam and the few pills it held went with me. 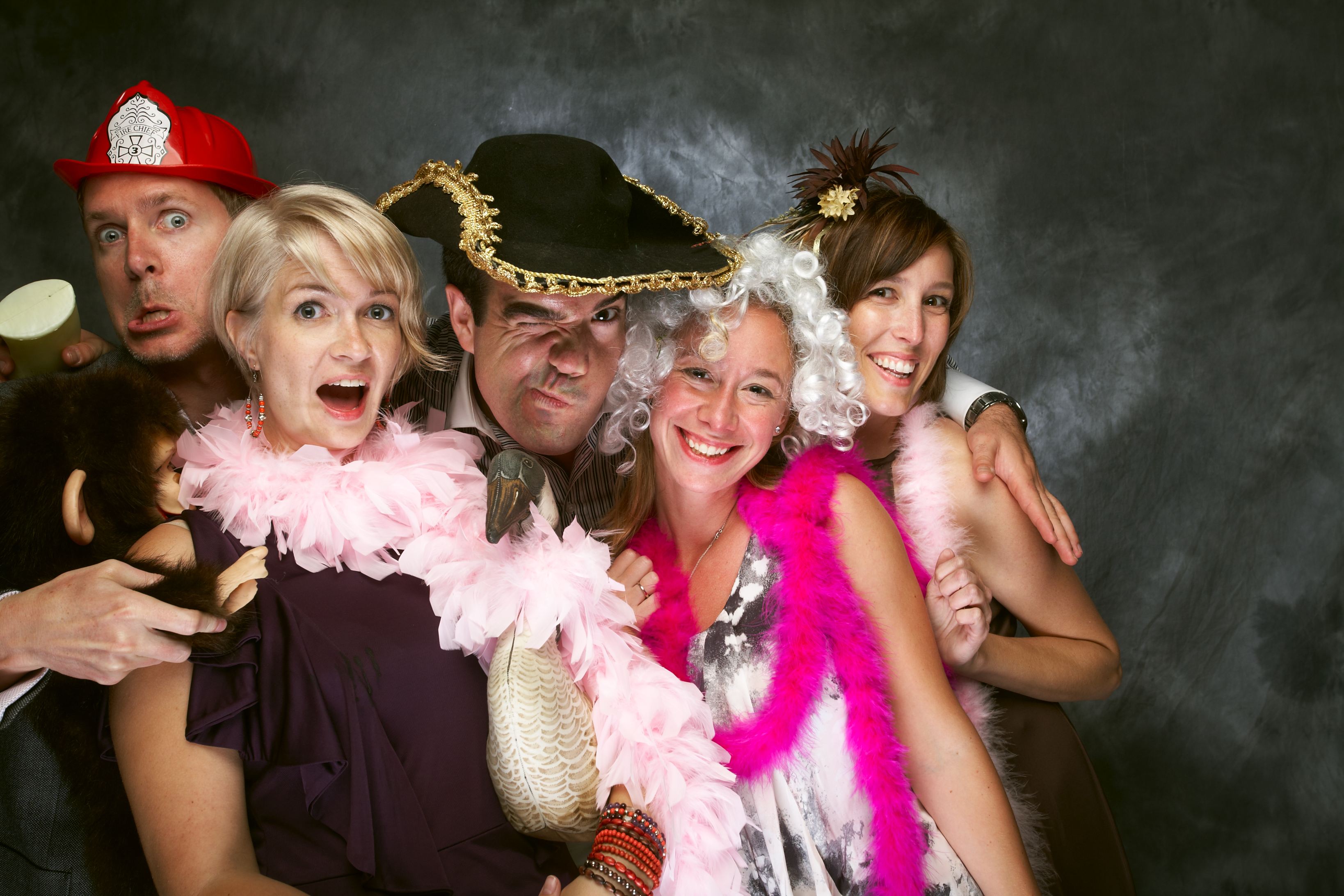 In San Francisco I enjoyed my new found freedom and lit up like a firefly to the light. I joined the nightly happy hours and brought my wardrobe up to snuff, relishing in eclectic pieces which finally did some justice to the style that was suffused in my cells but not on my palette. Oh, remember the white sailor girl dress, black boots (I coupled it with various pairs, the short retro looking bootie boots, the classic riding black boots, the pointy skin tight witches boots…) and white hat? 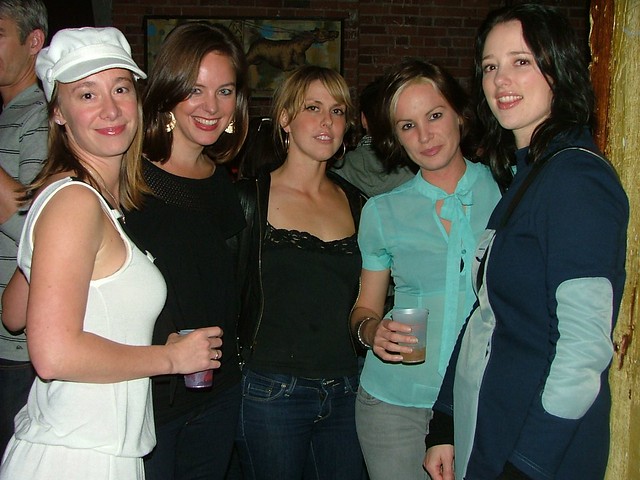 Oh how I loved to dress!

Jeez, do you guys know how you kill me day to day as I try to fit into this boring life you lead and love? The fantastic stories my clothes could tell you, era-by-era, multiple stories I could tell per day?

I’m a creative person, and I’m happy. Can you just get used to that idea?

Then I met Fabien. On our first date we met at a Luna Park, it was loud and his English wasn’t nearly as good as his French, and that did neither of us any good. I had left friends (some guy friend who I’d been having a blast with, but just a friend… was that Bill?) and was measuring the date against the moments I had left just before. Completely unfair, but a reality given the circumstances. I mean, I had been having tons of fun, and left it for what?… a date?! But I’d made plans, and I stuck to the plans. I don’t really recall what we talked about, or if there was even really any talk… between the loud music and his charming heavy accent, that is.

We stepped outside to the corner to part ways. We went to hug goodbye.

It was an embrace.

Wow. What was that?!

In that moment he won the second date.

Alas, while we shared a romantic convertible ride to wine country, a day written in someone else’s daydream between sparkling Chandon, strawberries, dinner at Angele, and a moonlight drive with music on the way home… it was a short lived romance in the pages of our overstuffed technology dayplanners. He was a CEO, and I had no interest in being the CEO’s wife. 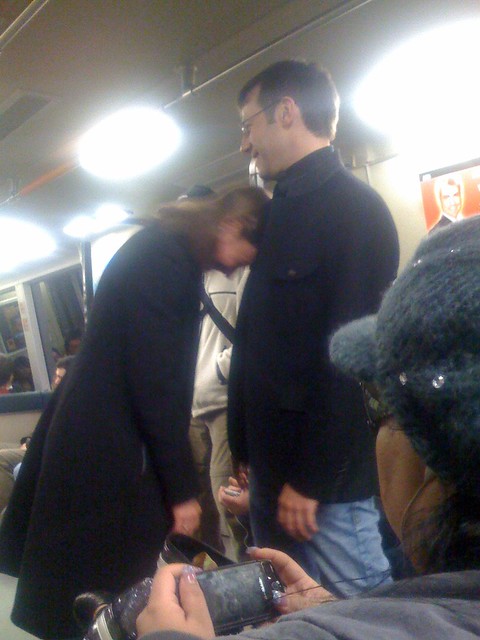 We parted ways to remain friends. I later took him to New York for his birthday—tons of fun and drama between the serendipitous Fuerza Bruta: Look Up show, wine, cheese, dinner and dessert, with Rachel, at Pastis, dancing until we fell asleep at Cielo, the passionate fight wound through the sidewalks of a brisk and cold walk in Central Park, back to the Waldorf Astoria, into the cab, and onto the plane home to the cool grey city of Love.

In the end I found San Francisco to be the leftovers of what once was. It’s the mecca for artists and lovers and dreamers, to be sure. But it’s overrun with abundance, confusion and people. It’s not Kerouac’s city, and it wasn’t to remain mine. There’s something of an arrogance to just being there. As if residence is validation in and of itself of having arrived, of not just being alive but living. I found it to be a surface level dream with no depth. I was lost and lonely and couldn’t have had more friends if I tried. 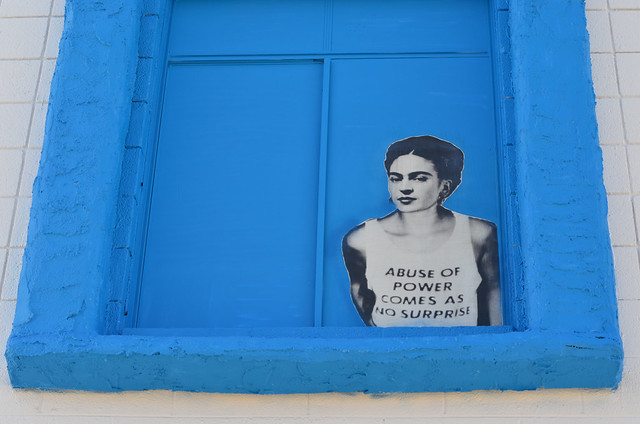 Every holiday was an excuse for an escape.

My first July 4th took me on a road trip to L.A. to spend the weekend with my friend who makes dreams come true by making tools for Spielberg. He proudly peacocked the city of Angels knowing good and well I both enjoyed it and found it profoundly lacking. I’ll never forget our debate via Twitter regarding women’s rights and who’d get to drive. He knew all along that I long for an era back in the day where men loved to drive women, and women loved to look out the window to day dreams of ways to make more love. 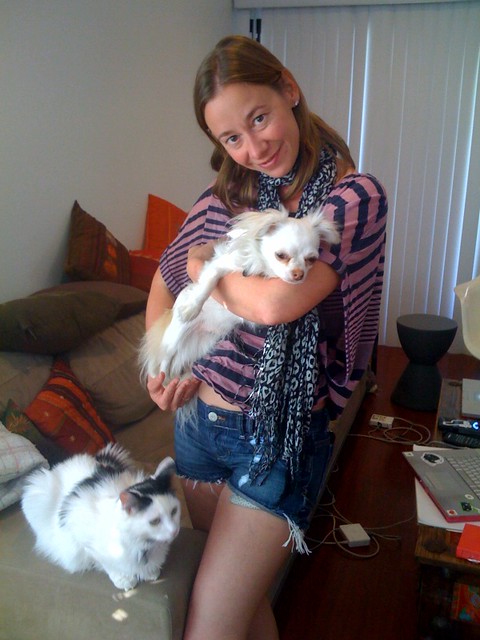 Halloween was a race to Los Angeles which was marked by my descent down the wrong escalator into the San Francisco Virgin America gates back when they were in the International Terminal… I turned to race up the escalator, was reminded of my silliness, and ended up on my knees, jeans shredded against the ridges of steel, my flesh fairing not much better. Stickel and I made it, but not on that flight, but we made it ultimately. You see I was the maid of honor in my best friend’s wedding, Tara Brown to her Sean Bonner.

At the top of the Runyon Canyon I witnessed Tara and Sean exchange vows, officiated by none other than Optimus Prime. Just a little while later, I feel a tinge of guilt when I learn she’s pregnant. I know it wasn’t in their plan, though Tara had long held dreams of being a mother. She absolved me from my guilt, and I attended a baby shower in LA that confused every bit of my sense of reality.

Tara had left, she’d found her love, her life. I’d left Microsoft, and Seattle for San Francisco, and she’d soon followed. I found Cindy in San Francisco, but now they’d both gone.

The city no longer seemed amusing, but cold and grey, dingy and dirty.

Oh, wait, but did I tell you about Memorial Day yet?

No, we save the best for last, and I’m perpetually amused at how America’s major holiday’s serve merely as markers for memories in my life.

You may say I’m a dreamer, but I’m not the only one. 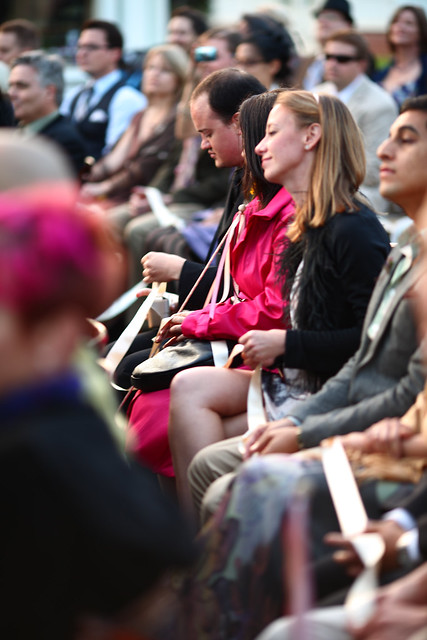 Jeez, what do I do when I know the matrix exists? The connections, the lack of coincidence? Divine, meddlesome, controlled, variables left tied up in neat little bows on packages that don’t seem to be the right presents. You made it right this time? Only if my mustang shows up, and heavy is limited to a state of mind and not a reference to my brother. He strolls in, and I wonder where are my hemp sandals? Black toe nail polish, blue on his fingers. A look as if death has washed over him, but he may yet be clean? I’m sorry what you see as my being stubborn is nothing but the exalted standards by which I deem myself deserving. Or maybe you could say I find myself divinely so. Oh, is it ironic or merely coincidence that the sun warms my keyboard for those few strokes, only to hide again at thought’s completion?

It’s enough to tempt a girl.

In my play I’m happy and creative.

I want to day dream, write, sing, dance, make movies, and music. I want to fall in love and live forever in paradise.

In my play I get to write the ending.

Now, whether it’s God or Natasha Bedingfield, well, that’d be a debate I’d take up over a fine deep red wine and a beautiful bleu cheese and pears. 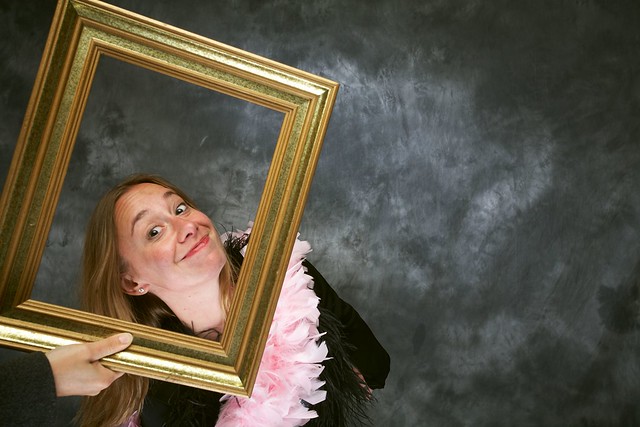 I am unwritten, can’t read my mind, I’m undefined
I’m just beginning, the pen’s in my hand, ending unplanned

Reaching for something in the distance
So close you can almost taste it
Release your inhibitions
Feel the rain on your skin
No one else can feel it for you
Only you can let it in
No one else, no one else
Can speak the words on your lips
Drench yourself in words unspoken
Live your life with arms wide open
Today is where your book begins
The rest is still unwritten

I break tradition, sometimes my tries, are outside the lines
We’ve been conditioned to not make mistakes, but I can’t live that way

Reaching for something in the distance
So close you can almost taste it
Release your inhibitions
Feel the rain on your skin
No one else can feel it for you
Only you can let it in
No one else, no one else
Can speak the words on your lips
Drench yourself in words unspoken
Live your life with arms wide open
Today is where your book begins

Love the new Feist, perfect way to wind down a creative day…

Microsoft: On Karma and Protecting the Innocent
Standard

3 thoughts on “To Thy Own Self, Do Not Be Truest”