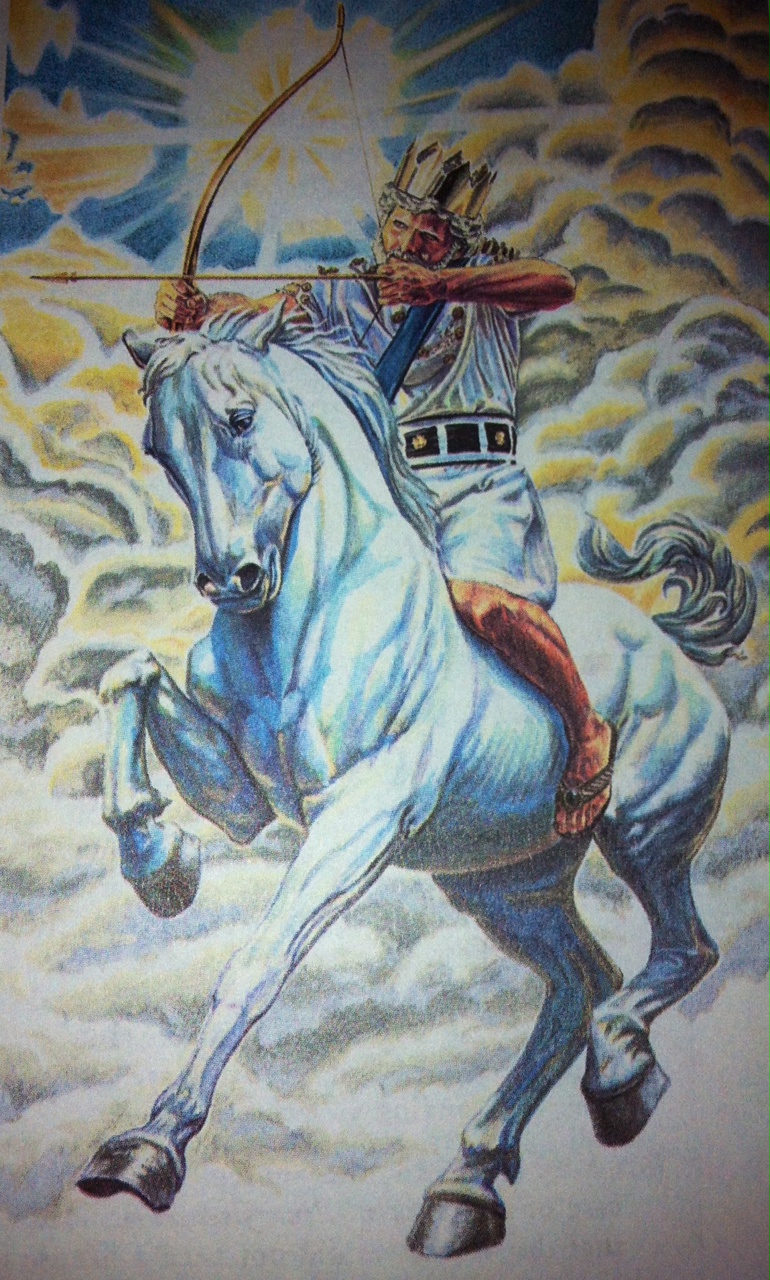 Who is the rider of the white horse of the four horsemen in Revelation? Is he Christ, or is he the anti-Christ?

This is a consideration of the material presented by the Watchtower in the “Revelation—It’s Grand Climax At Hand” (1988) book, page 90, paragraphs 3,4:

The White Horse and Its Illustrious Rider

John, and with him the zealous John class and companions of today, is privileged to see a fast-moving drama! John says: “And I saw, and, look! a white horse; and the one seated upon it had a bow; and a crown was given him, and he went forth conquering and to complete his conquest.” (Revelation 6:2) Yes, in answer to that thunderous “Come!” a white horse charges forth. In the Bible, the horse often symbolizes warfare. (Psalm 20:7; Proverbs 21:31; Isaiah 31:1) This horse, likely a beautiful stallion, gleams with a whiteness that indicates unblemished holiness. (Compare Revelation 1:14; Revelation 4:4; Revelation 7:9; Revelation 20:11.) How appropriate this is, for it portrays warfare that is clean and righteous in Jehovah’s holy eyes!—See also Revelation 19:11,14.

Who is the Rider of this horse? He has a bow, an offensive weapon of war, but he is also given a crown. The only righteous ones seen wearing crowns during the Lord’s day are Jesus and the class represented by the 24 elders. (Daniel 7:13,14,27; Luke 1:31-33; Revelation 4:4,10; Revelation 14:14) It is unlikely that a member of the group of 24 elders would be pictured as receiving a crown on his own merit. Hence, this lone horseman must be Jesus Christ and no other. John sees him in heaven at the historic moment in 1914 when Jehovah declares, “I, even I, have installed my king,” and tells him that this is for the purpose “that I may give nations as your inheritance.” (Psalm 2:6-8) Thus, in opening the first seal Jesus reveals how he himself, as the newly crowned King, sallies forth to war at God’s appointed time.

Is this really the Christ?

The events of the last days, and Revelation are both detailed by Christ himself in the book of Matthew, Mark and Luke in his own words, and a parallel account of the last days and the apocalypse in his book of Revelation.

A table is presented below which shows, based on my personal understanding and the flow of the scriptures which record the words of The Word of Truth himself, that these accounts are parallel. The events of the last days are similar to the climax of the events in Revelation, and then Christ’s return.

As presented below we have two rider’s on white horses in Revelation, first one of the four horsemen in Revelation 6, and then another in Revelation 19. The Watchtower teaches, as shown above, that these are the same person—Jesus Christ.

However, I believe that the rider of the white horse of the four horsemen is the anti-Christ.

“For false Christs and false prophets will rise up and perform great signs and wonders so as to deceive, if possible, even God’s chosen ones.” — Matthew 24:24

Another point of interest is the Lamb in Revelation Chapter 6—whom we know to be the Christ who died as a ransom sacrifice—who is opening the seals of the scroll. The Watchtower would have us suppose the Lamb opens the first seal, then responds the the order that follows, “Come!” to  leave his role as the Lamb, and then mount the white horse, returning to open the remaining seals after he finished his conquest? Or is it possible that the reasons this rider looks so much like Christ is simply because that’s the point? He seeks to conquer the world as the anti-Christ, deceiving those unaware as The False Christ.

AntiChrist of Revelation 6: The Four Horsemen of the Apocalypse

I watched as the Lamb opened the first of the seven seals. Then I heard one of the four living creatures say in a voice like thunder, “Come!” I looked, and there before me was a white horse! Its rider held a bow, and he was given a crown, and he rode out as a conqueror bent on conquest.

When the Lamb opened the second seal, I heard the second living creature say, “Come!” Then another horse came out, a fiery red one. Its rider was given power to take peace from the earth and to make men slay each other. To him was given a large sword.

When the Lamb opened the third seal, I heard the third living creature say, “Come!” I looked, and there before me was a black horse! Its rider was holding a pair of scales in his hand. Then I heard what sounded like a voice among the four living creatures, saying, “A quart of wheat for a day’s wages, and three quarts of barley for a day’s wages, and do not damage the oil and the wine!”

When the Lamb opened the fourth seal, I heard the voice of the fourth living creature say, “Come!” I looked, and there before me was a pale horse! Its rider was named Death, and Hades was following close behind him. They were given power over a fourth of the earth to kill by sword, famine and plague, and by the wild beasts of the earth.

When he opened the fifth seal, I saw under the altar the souls of those who had been slain because of the word of God and the testimony they had maintained.

The Christ of Revelation 19: The Rider on the White Horse

I saw heaven standing open and there before me was a white horse, whose rider is called Faithful and True. With justice he judges and makes war. His eyes are like blazing fire, and on his head are many crowns. He has a name written on him that no one knows but he himself. He is dressed in a robe dipped in blood, and his name is the Word of God. The armies of heaven were following him, riding on white horses and dressed in fine linen, white and clean. Out of his mouth comes a sharp sword with which to strike down the nations. “He will rule them with an iron scepter.” He treads the winepress of the fury of the wrath of God Almighty. On his robe and on his thigh he has this name written: The King of Kings and Lord of Lords.

For false Christs and false prophets will appear and perform great signs and miracles to deceive even the elect—if that were possible. See, I have told you ahead of time.

“So if anyone tells you, ‘There he is, out in the desert,’ do not go out; or, ‘Here he is, in the inner rooms,’ do not believe it. For as lightning that comes from the east is visible even in the west, so will be the coming of the Son of Man. Wherever there is a carcass, there the vultures will gather.

“Immediately after the distress of those days

‘the sun will be darkened,
and the moon will not give its light;
the stars will fall from the sky,
and the heavenly bodies will be shaken.’

“At that time the sign of the Son of Man will appear in the sky, and all the nations of the earth will mourn. They will see the Son of Man coming on the clouds of the sky, with power and great glory. And he will send his angels with a loud trumpet call, and they will gather his elect from the four winds, from one end of the heavens to the other.”

The seventh angel sounded his trumpet, and there were loud voices in heaven, which said:

“The kingdom of the world has become the kingdom of our Lord and of his Christ, and he will reign for ever and ever.”

The Body of Christ
Standard