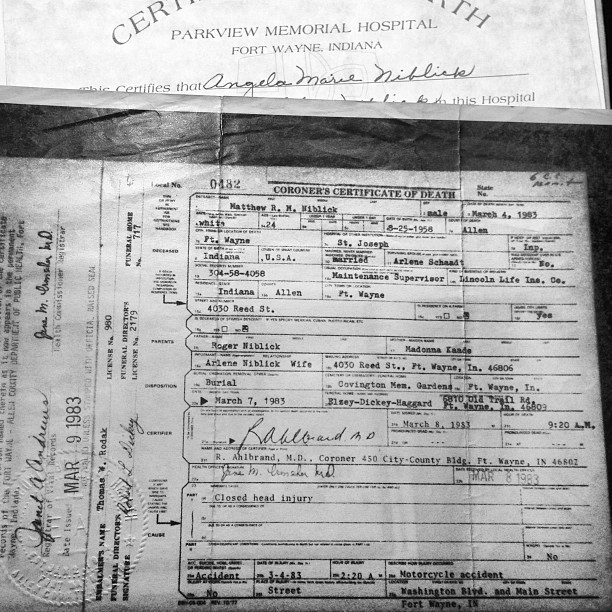 Letter to a Friend

I graduated to a larger keyboard in procrastination.

I went back to do the dishes and thought to myself, ‘this isn’t the life I want’. Did I tell you? I had even tried to convince myself that I just had to get things all in order so that everything in life would be ‘ready’. See how that worked out? Needless to say these hands have yet to hit dishwater. So much for Southern.

But is there really anything wrong with that?

If someone would give me just one cup, plate, bowl, spoon, fork, mug and what else do I need?

I’ll tell you what, just a really cool place to put them!

I need to figure out how to be happy, or this is going to suddenly feel like a very long life, I get the feeling, from here on out…

Today is the day that my daddy died, 30 years ago today, or some time within 12 hours or so either way, because I can never quite remember if the accident happened the night before, or if it was already considered the next day, and when it was that he died, or rather, how long it took him to die. And since I move so damn often, the paper which answers this question every year when I inevitably go searching for it to determine once again, for another year, just it was ‘when’ that ‘what’ happened, is buried in boxes which are worn and disheveled from the packing, repacking, and moving again, again, and again.

Any way, I’m listening to Yo-Yo Ma do Johan Sebastian Bach while considering doing my dishes, or just throwing out all my clothes, …or just moving to a life I’d prefer to be living?

It wouldn’t take a psychiatrist to be able to tell you that if I could have anyone with me here tonight to have a glass of single girl microwaved a few seconds to knock the chill off red refrigerated wine it would be my dad. No, not the one who called yesterday to make sure that I was okay, I think because he knows even if only from the signs from my mother’s odder than usual behavior triggered by it nearing that day again… No, I mean my father, the one who gave me life. He was an artist and a lover, a singer and a movie maker, although I have to tell you his song in the band is pretty much dreadful.

Here’s Dog Sweat, by Matthew Raymond Morris Michael Niblick. Don’t say I didn’t warn you, you’ll want to cover your ears. But to me, it’s music. That’s my daddy’s voice. When I heard this ‘song’ this past year, it was the first I’d heard my daddy’s voice, since he died thirty years ago. Still, Dad! What were you thinking?!

He was my father's "Father" until he found God for himself. 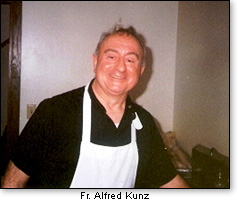 Years ago my aunt, the nun, apparently worked in the same parish as Father Alfred Kunz, a rebel Roman Catholic priest who performed exorcisms. They became friends, and like all friends of the Niblick’s at some point he was at the house with the family. Father Al admired my father’s art and invited Matthew out to work on his church in Dane, Wisconsin. What artist would deny the Church as a patron, not even Da Vinci?

Just a few years later, my father dies in a tragic accident in the lonely hours of that pre-light March morning.

Nobody foresaw it on that cold, gray March morning, but the aftermath of Kunz’s death would get strange, and then even stranger. There would be stories of exorcism referrals, a satanic assassination and, eventually, innuendos of sexual impropriety by Kunz, who was known at St. Michael simply as “Father Al.”

Later, there would even be allegations that his murder could somehow be linked to evil in the most unthinkable of places: the vast Catholic hierarchy that Kunz was tied to as a diocesan priest. Some even blame the Vatican in Rome.

In the absence of an arrest, the Kunz case also has developed into a religious Rorschach for many — certainly among those close to the case who consider themselves traditionalists within the troubled Roman Catholic Church, which all but invented the Easter holiday as Western civilization knows it today.

“Fifteen years later, someone could still be haunted…

The all-consuming rage at the cockeyed old priest; the uncontainable hatred, day after freezing winter day. The wee-hours confrontation in a dim school hallway outside the priest’s office, where he’d slept like a castaway for the past 31 years.

The attack, the frantic struggle: It all ended in a heartbeat, when the killer plunged a razor-sharp blade into Father Alfred Kunz’s neck, slicing the major artery below his jaw.

And then came all the blood — warm, slippery torrents of it, coating the painted cinderblock walls and the worn, gritty floor tiles. Almost instantly, Kunz fainted into a lifeless heap, his white T-shirt and black slacks soaked from the gaping wound. According to emergency room medical experts, he would have lived for about another minute, probably in a deep, dreamlike haze.

Asperges me domine… Thou shalt sprinkle me, O Lord…

… et mundabo. …and I shall be cleansed.”

Pedophilic Satanism in the bed of Roman Catholicism—the Vatican, otherwise known as the house of Babylon the Great—exorcisms, animal sacrifice, Luciferians; it’s a terrifyingly truthful tale entitled “The Devil and Father Kunz: An Easter tale about murder, the Catholic Church and the strange paths of good and evil“.

Kunz had also traveled to Rome and met Pope John Paul II as the pontiff prayed alone one morning at a secluded Vatican chapel.

One of Kunz’s closest associates was best-selling novelist Malachi Martin, a one-time Vatican insider under Pope John XXIII, who convened Vatican II. Martin would later leave the Vatican circle and become an exorcist, as well as the author of six religious novels, one of which, “Windswept House,” was compared to “Dr. Zhivago” by the Washington Post in 1996…

“What Luciferians resent is interference with someone they regard as theirs,” Martin told me in that interview, adding that his friend believed his life was in danger in the weeks before his death. “We are all convinced beyond anything that Father Kunz was killed in hatred of the faith as punishment — and as an example for the rest of us.”

Martin also repeated his belief that the aftermath of Vatican II was nothing less than a coup by Satanic forces – that, he said, was why he eventually broke with the church’s new mainstream after Vatican II. Martin wrote about the alleged dark influence often in his novels. In “Windswept House,” for instance, he described a satanic animal sacrifice linked by telephone to the Vatican’s Chapel of St. Paul – and the account does bear eerie similarities to a calf mutilation that occurred near Dane almost exactly 24 hours before Kunz was last seen alive.

It’s been thirty years later now, and I wonder more than ever of the short days of my father on this earth. I find 33 a little young to feel so world weary, just look at all my father got in by 23.

I had wondered about whether or not my dad had ever made it to San Francisco the year he hitch hiked across the United States to California for his summer vacation when he was 15. As I realize that he escaped from a Moonie camp, whose home base was in Boonville north of San Francisco out past wine country, it dawns on me, of course he did.

And maybe one day I’ll make it out to Father Al’s church in Dane, Wisconsin, to see my father’s art, though I doubt it… I imagine it would be hard to concentrate with the image of the slain Father Al, hanging before me, throat cut from ear-to-ear, beheaded and bled.