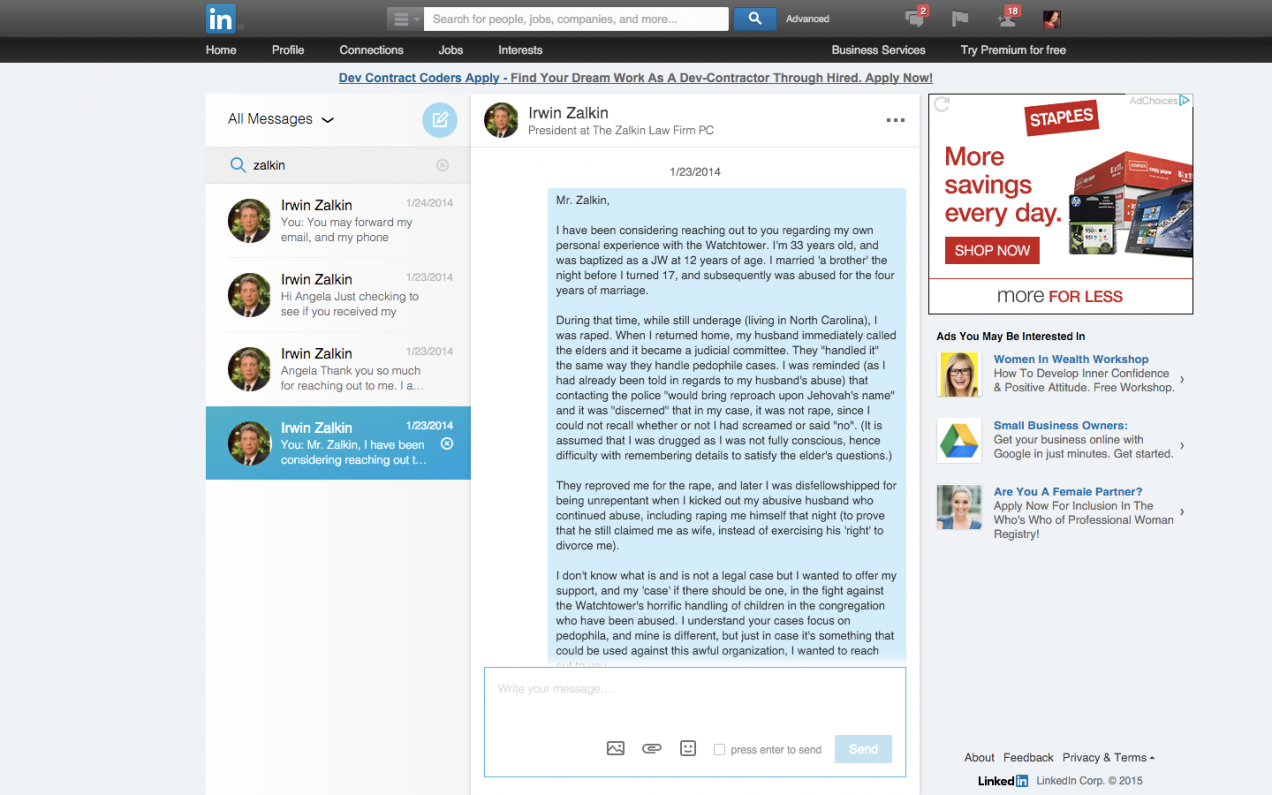 I have been considering reaching out to you regarding my own personal experience with the Watchtower. I’m 33 years old, and was baptized as a JW at 12 years of age. I married ‘a brother’ the night before I turned 17, and subsequently was abused for the four years of marriage.

During that time, while still underage (living in North Carolina), I was raped. When I returned home, my husband immediately called the elders and it became a judicial committee. They “handled it” the same way they handle pedophile cases. I was reminded (as I had already been told in regards to my husband’s abuse) that contacting the police “would bring reproach upon Jehovah’s name” and it was “discerned” that in my case, it was not rape, since I could not recall whether or not I had screamed or said “no”. (It is assumed that I was drugged as I was not fully conscious, hence difficulty with remembering details to satisfy the elder’s questions.)

They reproved me for the rape, and later I was disfellowshipped for being unrepentant when I kicked out my abusive husband who continued abuse, including raping me himself that night (to prove that he still claimed me as wife, instead of exercising his ‘right’ to divorce me).

I don’t know what is and is not a legal case but I wanted to offer my support, and my ‘case’ if there should be one, in the fight against the Watchtower’s horrific handling of children in the congregation who have been abused. I understand your cases focus on pedophila, and mine is different, but just in case it’s something that could be used against this awful organization, I wanted to reach out to you.

I coincidentally happen to now be a Jehovah’s Witness again, in name only, having been recently reinstated after many years. It worked to allow me to marry my husband (also a JW in name only) among our families who are all “in the truth”. If there is ‘a case’ in my personal experience then please let me know.

I am currently still counted a California resident, though I may have to give that up for residency in North Carolina where my husband and his children live, and my hometown where this all occurred, Charlotte.

I haven’t told my story to anyone outside the ‘organization‘, and know that you’ll respect my privacy.

I’m extremely upset with the way that they handle domestic abuse and child abuse, and was left in the care of a pedophile (Travis Foote, incarcerated in Oklahoma) who miraculously never abused me. Whatever I can do to help, I would be pleased to do.

I imagine that my “being a Jehovah’s Witness” only would serve to help the case when speaking out against them, at least until they would retaliate once again stealing my family and life away.

I appreciate your time in reading my email, and hope to hear a response so I may lay it rest, even if it’s a simple and quick — “it’s not a case”.

Thank you so very much for helping others in San Diego (I was reinstated as a member of the Pacific Beach congregation), and California.

One thought on “Spunky Gidget Links In Zalkin”