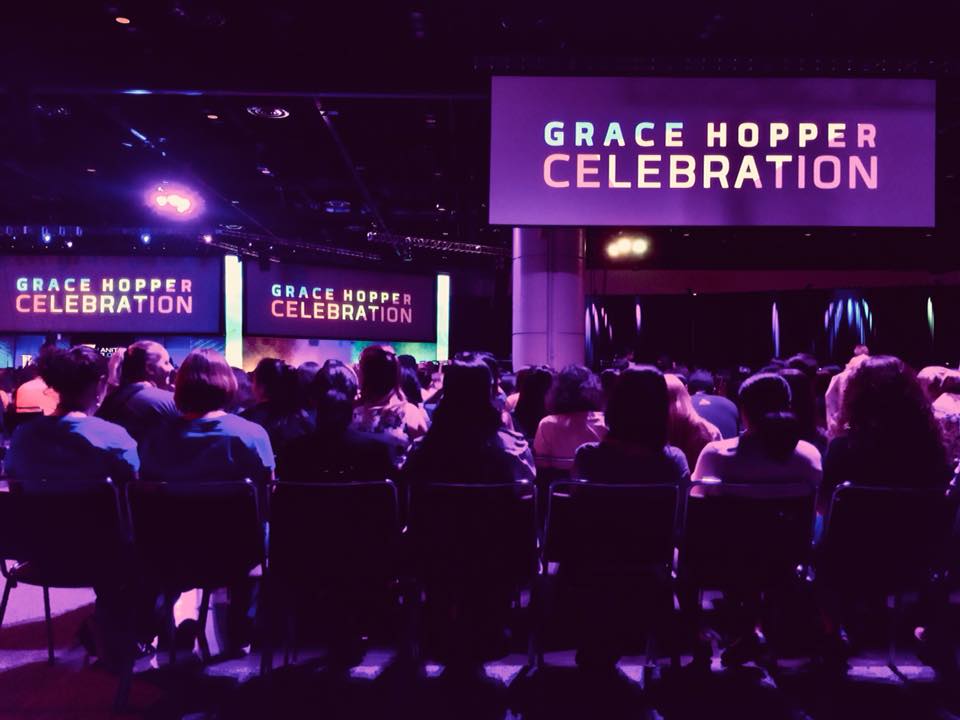 “Across the country this week, people turned toward their screens. They checked their phones and huddled around their TVs to get the latest on the testimony of a woman who came forward to accuse a Supreme Court nominee of sexual assault — the latest development in the #MeToo movement — and to watch that nominee defend himself.

But at the Grace Hopper Celebration, a conference for women in computing, attendees maintained focus on the event and its mission: doing the nitty-gritty work that eventually shifts a culture toward equality, while staying optimistic in the face of adversity.”

So it is that we launched DisneyNow on September 28th, and the next day I’m on my way to Disney World!… and Grace Hopper 2017.

I felt so lucky to get to meet up with Ingrid Hong who had just finished interning for our design team, and was happy to have another designer friend and her boyfriend as our guests as happy hoppers—get it? get it?— We were the Grace Hopper park hoppers, hehe.

I ran into Melinda Gates, who didn’t recognize me, in the hallway, as I was surrounded by 20,000 more women in computing…

But then there’s #metoo…

… and then I ran into David Horn. In our booth, recruiting, like me.

Day after day I tried my best to stay out view of him, given our history:

It was only days after Darryl and I got married that I attended YxYY 2013 where David decided to press his tiny hard penis into my butt as I danced on the dance floor with my girl friends. As if!

I hadn’t realized where he worked.

Of all the guys to recruit women at Grace Hopper, it had to be you?

I interviewed many women and met hundreds more—but I regret that I remember his presence at Grace Hopper, the premier conference for women in technology, more than all those amazing women.

It doesn’t seem fair that a man can just do that and get away with it.

I’m forever grateful for meeting such a beautiful person like you. You believed in me and because of you I am where I am today! You were my little angel (or Angela ☺️)! Thank you for everythinggg ❤️❤️❤️❤️❤️

Natalia Ximena Pulido, whom I recruited and placed with ESPN

Update January 2019: David has moved from Disney to Twitch. Makes me wish JDoe.io (an I app I consulted for in 2015) was for more than just anonymously reporting rape… I guess that’s just the job for #AngieAndMeToo, huh?

Nadella at 2014 Grace Hopper Celebration of Women in Computing
Standard