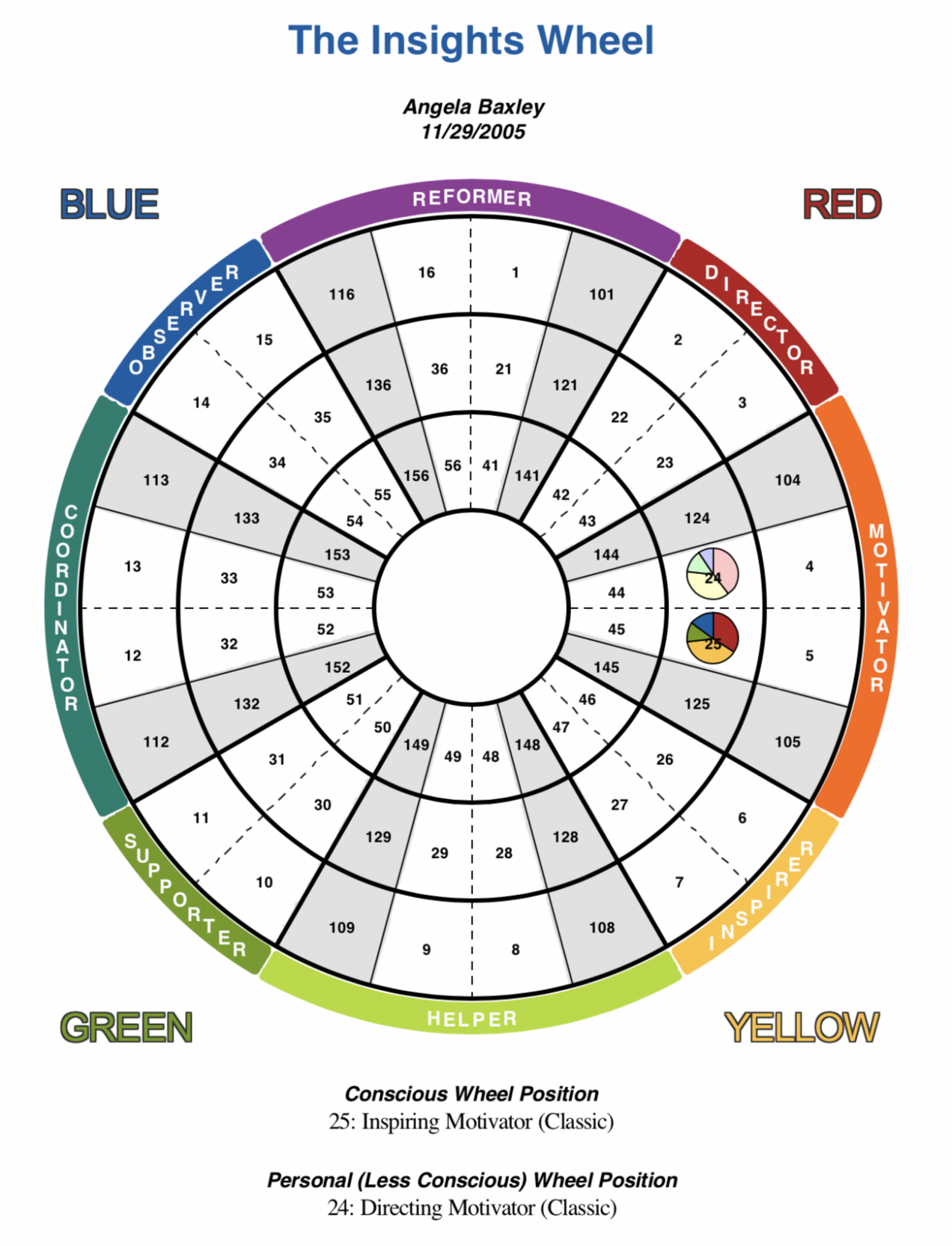 Angela is extremely perceptive about the attitudes of others, aiming to understand rather than judge events. She can find it hard to concentrate on the small details and she may get bored with projects quickly. She appears to thrive on a wide variety of tasks focusing on a motivating or promoting role. She needs work that makes use of her strongly creative drive. Angela may generate more ideas, possibilities and plans in one day than others might manage in a month!

Tasks that involve practical day-to-day maintenance tend to frustrate her. Angela’s interest, enthusiasm and energy levels are high. She will dismiss negatives, being eager to accomplish the task. Angela gains motivation from her ability to generate ideas. Her almost permanently positive state can often carry others with her. Angela tends to know intuitively what structure and organization is necessary to harness ideas and people to achieve long-range goals. Angela is energetic, enthusiastic, responsible, conscientious and persuasive.

She gravitates to other people and is highly skilled at understanding others’ needs and motivations, usually appearing friendly, tactful and sympathetic. She focuses attention on achieving success and acquiring status symbols as evidence of that success. Routine is the real bad news for her, and it may sap her energy. Angela is an ingenious and original problem solver. Tending to pursue success mainly to reinforce her sense of self worth, she likes to experience a steady stream of new ideas to assist her in goal attainment.
She tends to have an interest in the new and unusual and is gifted at expressing her feelings. Writing important facts or steps down on paper helps her keep from getting side-tracked, but she may lack the discipline necessary to do this well. She feels constantly drawn to begin many different projects, yet by failing to complete many of them, she allows her energies, inspirations and insights to become dissipated. Her life will tend to be a series of initiated, but unfinished projects. Her aim is to fit all the pieces of the jigsaw together into a complete picture, but for Angela the jigsaw keeps expanding with the discovery of every new piece.

Her imaginative perception gives her the energy to start lots of new projects, and keep a large number of balls in the air. She is inventive, independent and can be extremely perceptive of the potential contained within the views of others. Details and the deeper interpersonal skills are not her strong points as she is mainly interested in seeing the possibilities beyond the present. She will invariably have more to show for her efforts when she follows through to completion the necessary but tedious parts of a project. She enjoys projects where she can be seen to bring out improvements.

Angela enjoys involvement in many activities, with a variety of people. She is stimulated by doing the unexpected or the unusual. Unconventional in approach and enjoying motivating others to exceed what is accepted and expected, she likes to live freely, looking for variety every day. Angela’s feelings play a prominent role in her life and she manages to inject a friendly element into any work she is assigned to or involved in. Angela is both charming and popular, constantly enthusing through her gift of ready articulation.When Angela is in charge of a project she offers the team long-term vision and the ability to inspire and communicate that vision to others.

Her “drive” is natural and not contrived. She prefers democratic and participative processes rather than written instructions or autocratic systems. Angela remains open and perceptive to the attitudes and views of others, often seeking to understand others rather than to judge them. Because she is so interested in possibilities, Angela sees significance in everything while preferring to keep lots of options open. She prefers what might be, rather than the reality of what is already.

People see Angela as enthusiastic, ingenious, imaginative and dynamic, with highly developed interpersonal skills. She may sometimes present herself as an “expert”, fully knowledgeable on a subject and eager to educate others about it. This can sometimes prove embarrassing when challenged by a more qualified expert. She can be very vocal about social or people issues that concern her and can often be seen as the underdog’s “champion”. She is at her best in co-operative roles that deal with people and allow her to air her views. Angela’s preferred focus is on the positive, harmonious and uplifting aspects of people and human relations.

People occasionally see Angela making decisions that appear to fly in the face of logic. With her enthusiasm and spontaneity, Angela brings a refreshing approach to decision making. Angela expresses what she thinks are strong, decisive opinions in the hope that unresolved issues and conflicts can be concluded quickly. Constantly generating ideas, she sometimes has trouble focusing on just one thing at a time and can find difficulty in making consistent and lasting decisions. Trying to focus more on the facts, not just on the people, can be helpful in her decision making.

As an extraverted, future oriented person, she may fear failure but knows how to turn it on its head into something positive, if the event occurs. She is a quick decision maker and considers people within the context of the result of the task. To carry out her innovative ideas, Angela relies on her impulsive energy. She is a keen initiator who finds most problems stimulating. Angela is inquisitive, versatile, adaptable and resourceful in solving challenging, theoretical problems. A tendency to take rejection and conflict personally may lead to her not taking early notice of the opinions of key members of the team.

Work that uses her ideas to improve or start a project suits her, but once these ideas get off the ground she prefers someone else to carry on with the details. Because she finds the information gathering part of a project the most tedious, she runs the risk of never getting past the “start” phase, or once started, never completing. She can be creative and imaginative. She sees so many possibilities that she sometimes has difficulty selecting the best activity or interest to pursue, or in keeping to the agreed track. She has a tendency towards making higher risk decisions.

This section identifies the key strengths which Angela brings to the organization. Angela has abilities, skills and attributes in other areas, but the statements below are likely to be some of the fundamental gifts she has to offer.

Jung said “wisdom accepts that all things have two sides”. It has also been said that a weakness is simply an overused strength. Angela’s responses to the Evaluator have suggested these areas as possible weaknesses.

Value to the Team

Each person brings a unique set of gifts, attributes and expectations to the environment in which they operate. Add to this list any other experiences, skills or other attributes which Angela brings, and make the most important items on the list available to other team members.

As a team member, Angela:

Communication can only be effective if it is received and understood by the recipient. For each person certain communication strategies are more effective than others. This section identifies some of the key strategies which will lead to effective communication with Angela. Identify the most important statements and make them available to colleagues.

Strategies for communicating with Angela:

Certain strategies will be less effective when communicating with Angela. Some of the things to be avoided are listed below. This information can be used to develop powerful, effective and mutually acceptable communication strategies.

When communicating with Angela, DO NOT:

Our perceptions of self may be different to the perceptions others have of us. We project who we are onto the outside world through our “persona” and are not always aware of the effect our less conscious behaviours have on others. These less conscious behaviours are termed “Blind Spots”. Highlight the important statements in this section of which you are unaware and test them for validity by asking for feedback from friends or colleagues.

Angela is occasionally tempted to opt for the quick decision even though some of the key facts may not be in place. She needs to resist the urge simply to perform and instead try to more readily share who she really is. Her intense dislike for routine and predictable events can make it difficult for her to notice or even acknowledge the necessary details. As a forthright, results oriented individual, she will challenge authority, take risks, overstep boundaries and act without reference. She would do better if she sought the advice of more practical people to find out how workable and useful her ideas are.

Angela’s tendency to become distracted from finishing the tasks she starts sometimes may make her appear indifferent or disinterested to some. She expects to win and is very assertive in attaining outcomes despite how narrow her view may sometimes appear. She could sometimes slow down and pay closer attention to the finer details of her projects. Angela is often so involved in her own processes that she fails to notice what is happening elsewhere. When she doesn’t see the logic in others’ feelings, Angela can appear argumentative and difficult to approach, and may not seek or accept common-sense advice.

As an extraverted, future oriented person, she may fear failure above all else. It is difficult to know what to expect from her next. She would much rather engage in quick intellectual banter than complete some mundane task or consider spending quiet time on her own. She is honest and fair but can be seen as rather blunt and tactless in her ready criticism of others.

Insights Discovery does not offer direct measures of skill, intelligence, education or training. However, listed below are some suggestions for Angela’s development. Identify the most important areas which have not yet been addressed. These can then be incorporated into a personal development plan.

Angela may benefit from:

People are generally most effective when provided with an environment which suits their preferences and style. It can be uncomfortable to work in an environment which does not. This section should be used to ensure a close match between Angela’s ideal environment and her current one and to identify any possible frustrations.

Angela’s Ideal Environment is one in which:

It has often been said that it is not possible to motivate anyone – only to provide the environment in which they will motivate themselves. Here are some suggestions which can help to provide motivation for Angela. With her agreement, build the most important ones into her Performance Management System and Key Result Areas for maximum motivation.

Angela is motivated by:

There are many different approaches to management, most of which have different situational applications. This section identifies Angela’s natural management approach and offers clues to her management style, highlighting both gifts and possible hindrances that can be further explored.

This section identifies Angela’s natural management approach and offers clues to her management style, highlighting both gifts and possible hindrances that can be further explored.

In managing others, Angela may tend to: