These books are recommended for further research regarding Our Father, His Son, the Spirit, the Word, the Truth, and the name. 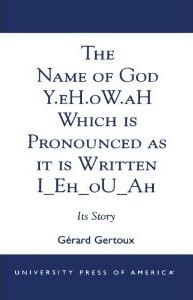 The Name of God Y.eH.oW.aH
Which Is Pronounced As It Is Written I_Eh_Ou_Ah: Its Story by Gérard Gertoux

God’s name is fundamental to all monotheistic religions. Paradoxically, religions prefer to translate God’s name as Yahweh “He Is,” Adonay “my Lord,” Allah “The God,” rather than use a transcription of the name. The key to unlock the mystery of it’s pronunciation was provided by the famous Maïmonides, 800 years ago, when he wrote that the Name “is read as it is written.” The Name of God Y.eH.oW.aH Which is Pronounced as it is Written I_Eh_oU_Ah is Gérard Gertoux’s (Professor of National Education in France) examination of the paradox of the correct pronunciation, “Yehowah“.

To learn more about this book, please visit the author’s website.

The Exalted Name Bible™ re-inserts the full Hebrew name of our Creator, Yehowah, into both the Old Covenant and New Covenant, bringing a unique fullness of life to His Inspired Word.

At the same time, we have also re-inserted the abbreviated form of His Exalted Name, (YAH) wherever it belongs, which is normally connected to other words, thereby forming many of the names of the children of Israel.

Truth in Translation:
Accuracy and Bias in English Translations of the New Testament

Written with the student and interested public in mind, Truth in Translation aims

to explain what is involved and what is at stake in Bible translation. It begins with brief treatments of the background to the Bible and its translation, the various approaches to translation, and the specific origins of nine translation versions in wide use in the English-speaking world today. It then proceeds to compare those versions on nine points of translation, ranging from individual terms, to difficult passages, to whole categories of grammar. The book serves to inform readers of the forces at work shaping the meaning of the Bible, to help in their selection of Bible translations, and to act as a critical catalyst for the improvement of Bible translations through more careful attention to the risk of bias in the translation process.

Includes critique of The New World Translation of the Holy Scriptures (NWT) translation of the  Bible, published by the Watch Tower Bible and Tract Society in 1961, used and distributed by Jehovah’s Witnesses.

In Apocalypse Delayed, Penton offers a comprehensive overview of a remarkable religious movement. His book is divided into three parts, each presenting the Witnesses’ story in a different context: historical, doctrinal, and sociological. Some of the issues he discusses are known to the general public, such as the sect’s opposition to military service and blood transfusions. Others involve internal controversies, including political control of the organization and the handling of dissent within the ranks.

Penton has combined the special insight of an insider, as a forth generation Jehovah’s Witness, with the critical analysis of an observer at a distance from his subject, as professor emeritus of history at the University of Lethbridge,  to create a penetrating study of a spreading world phenomenon, and the most thoroughly researched and objective history of the Jehovah’s Witnesses available.

Crisis of Conscience:
The Struggle Between Loyalty to God and Loyalty to One’s Religion by Raymond Franz

Raymond Victor Franz was a member of the Governing Body of Jehovah’s Witnesses from 20 October 1971 until 22 May 1980, and served at the organization’s world headquarters for fifteen years, from 1965 until 1980.

Ray writes a first-hand personal account detailing his experiences as a governing body member and as the  nephew of Watchtower President Fred Franz. You’ll find overwhelmingly positive Amazon reviews expressing appreciation for the loving manner in which he told his story and strongly recommending this book.

In Search of Christian Freedom

When a Jehovah’s Witness faces a Crisis of Conscience and their spiritual family is made aware, the question they most often face is “But where would you go?” a common misquote of Peter’s response to Jesus at John 6:68.

“Simon Peter answered him: “Lord, whom shall we go away to? You have sayings of everlasting life.”

However, as the question remains “Where do we go from here?”—Raymond gives his personal response in this book which focuses on the more subtle day-to-day influences of spiritual legalism, group psychology, and organizational authority.

Captives of a Concept (Anatomy of an Illusion)

Understanding the Illusionary Concept that holds millions of Jehovah’s Witnesses Captive by controlling how they think and act without them realizing it.

Captives of a Concept identifies both the concept and the mistake that causes people to become captives of it. The book also offers a few suggestions about how to help Jehovah’s Witnesses correct their mistake and teach themselves the truth.

Gertoux, Gérard. The Name of God Y.eH.oW.aH Which Is Pronounced As It Is Written I_Eh_Ou_Ah: Its Story. University Press Of America, 2002. Print.

Hatch, Edwin, and A. M. Fairbairn. The Influence of Greek Ideas and Usages upon the Christian Church. London: Williams and Norgate, 1891. Google Books. Web.

Hatch, Edwin. The Organization of the Early Christian Churches: Eight Lectures Delivered before the University of Oxford, in the Year 1880. London: Rivingtons, 1888. Google Books. Web.

Hislop, Alexander. The Two Babylons, Or, The Papal Worship Proved to Be the Worship of Nimrod and His Wife with Sixty-one Woodcut Illustrations from Nineveh, Babylon, Egypt, Pompeii,... Edinburgh: James Wood, 1862. Archive.org. Web.

Roberts, Alexander, James Donaldson, A. Cleveland Coxe, and Allan Menzies. Ante-Nicene Fathers: The Writings of the Fathers down to A.D. 325 Archive.org. Web.

Strong, James. The Exhaustive Concordance of the Bible: Showing Every Word of theText of the Common English Version of the Canonical Books, and Every Occurrence of Each Word in Regular Order ; Together with A Comparative Concordance of the Authorized and Revised Versions, including the American Variations ; Also Brief Dictionaries of the Hebrew and Greek Words of the Original with References to the English Words. New York: Methodist Book Concern, 1923. Print.

2 thoughts on “The Library”