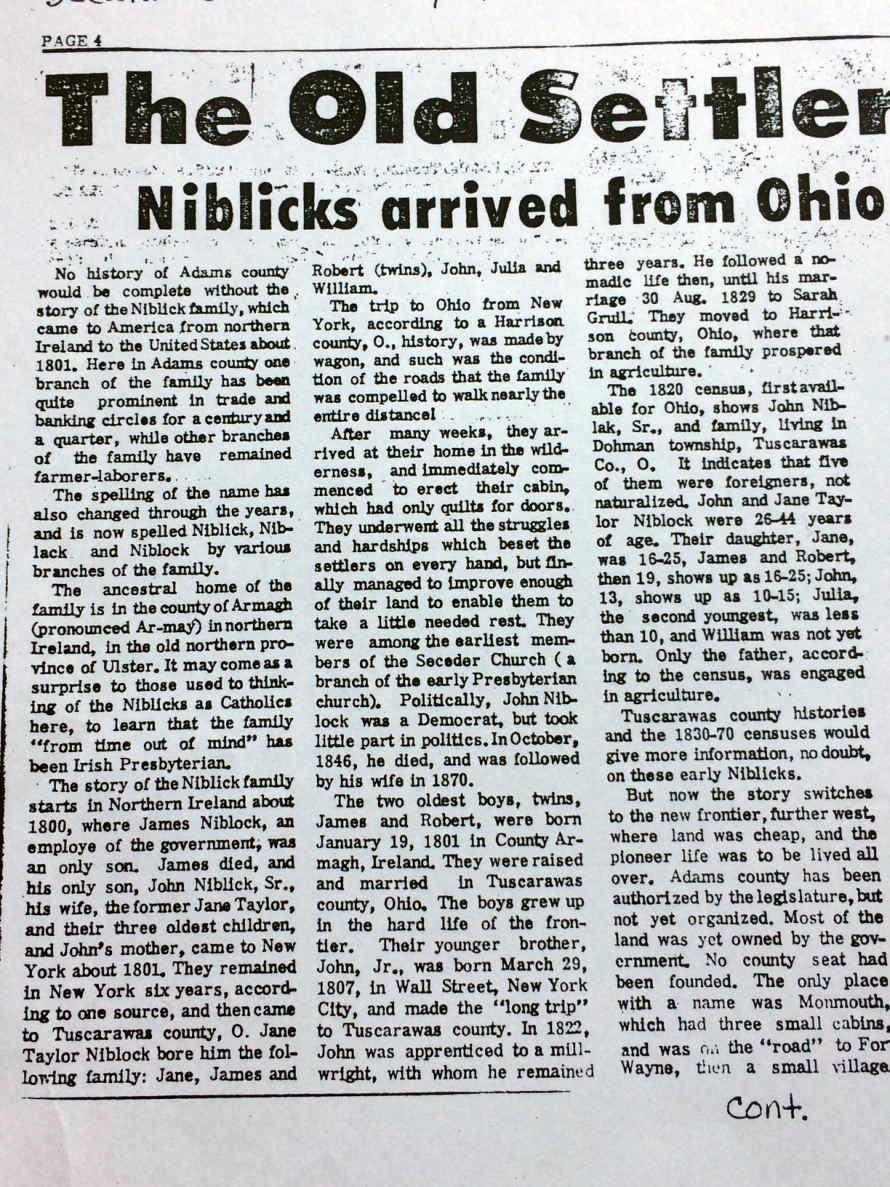 It would be impossible to tell the history of Adams County or recount the business activities of the City of Decatur without a multiplication of reference to members of the Niblick family. More than eighty years ago they settled in the county, then a complete wilderness. They did the work of pioneers, clearing up the forests, making possible the cultivation of land, and their business enterprise took many directions. One branch of the family, of which Mr. John Niblick is a member, has been especially identified with merchandising and banking at Decatur. Mr. John Niblick is president of Niblick & Company, conducting perhaps the chief department store of Adams County, and it is interesting to note that this business is a lineal and logical successor of a stock of merchandise established in a log house in Decatur more than seventy-five years ago.

The Niblicks from time out of mind have been Irish Presbyterians, their original home being in County Armagh, Ireland. Several generations ago the name was spelled Niblack, and it was the grandfather of Mr. John Niblick who changed the spelling to the present form. The founder of the family in America was known as John Niblack, Sr., who was born in County Armagh of old Irish stock. Besides farming he was also an Irish miller. He brought his family to America about 1803.

James Niblick and his twin brother Robert were both pioneers of Adams County, Indiana. James Niblick was born in County Armagh, Ireland, in 1801 and was brought by his parents to America at the age of two years. From New York State they removed to Ohio, where James Niblick’s brother followed farming and James learned the cooper’s trade, and in the fall of 1834 came to Adams County, settling on section 6 of Washington Township. He is said to have been the ninth settler in the county. He subsequently sold his farm in that township and moved to Decatur, and later removed to Missouri, where he lived until his death in the fall of 1869.

Before coming to Indiana James and Robert Niblick lived for some time in Tuscarawas and Harrison counties, Ohio. James married his first wife there, Anna Carter, and they brought with them to Adams County two children, Jesse and Adelaide. They arrived in this county the same year as Decatur was laid out as a town. Robert Niblick made settlement at the same time and in the same community. Before they could engage in agriculture it was necessary to clear away the heavy forests which encumbered the land, and their first homes were log cabins. Indians were still numerous, and these pioneers had no difficulty in supplying the table with provisions of wild game. There were no roads nor bridges, and the Niblick brothers cut or blazed trails through the woods in order to mark the way to their habitation. Robert Niblick died on his old homestead in Adams County. James Niblick married for his second wife Sarah A. Ball, who died in the fall of 1886, having returned to Decatur after her husband died in Missouri. James Niblick was the father of sixteen children, eight by each wife, there being five sons and three daughters of the first marriage and one son and seven daughters of the second. Among the children of the first marriage were Robert, Jesse, Mary Jane, Adelaide, and William B. William is a bachelor and still living in Chicago. Adelaide is Mrs. James Dailey and lives in Wells County.

Jesse Niblick, son of James and Anna (Carter) Niblick, was born in what is now Carroll County, Ohio, August 12, 1826. His mother died on the old homestead in Adams County August 12, 1838. Jesse Niblick was about ten years of age when the family came to Adams County and a few years later his grandfather, John Niblick, gave him the opportunity of attending school at Cadiz, Ohio. In 1842 he returned to the home farm, and he soon began an apprenticeship at the shoemaker’s trade, and in 1846 engaged in that business for himself. He thus became early identified with the business affairs of Decatur, and continued the boot and shoe business until 1866. In that year he sold his business to his brother-in-law an d in July of that year bought an interest in a general store with John Crawford, under the name Niblick and Crawford. They bought the stock of merchandise established by that pioneer of Decatur merchants, John Nutman. Later the firm of Niblick & Crawford brought in their sons as partners and the business title was changed to Niblick, Crawford & Sons. In February, 1887, the Crawfords withdrew and from that time on Mr. Niblick was active head of the business until his death in October, 1895. After that the store was conducted by his son John and the latter’s brothers as executors, and in March, 1897, the business was incorporated under the name of Niblick & Company. This has been developed as a large department store, carrying a stock of staple merchandise sufficient to supply all the demands of both city and country dwellers. Thus there has been no interruption to a business which was established by J. D. Nutman in a log house in Decatur in 1840. Years have brought many increases and changes in style and quarters, but the house is today one of the oldest business firms of the county.

In 1871 Jesse Niblick with J. D. Nutman engaged in a private banking business, opening the Adams County bank, Niblick & Nutman, bankers. Later David Studabaker and R. W. Allison became associated with them. Joseph D. Nutman was responsible for the establishment of the first bank at Decatur in 1857. The institution was moved to Fort Wayne several years later. The permanent banking history of the city begins with the year 1871. Mr. Nutman soon retired from banking, leaving the firm Niblick, Studabaker & Company, and in August, 1874, the Adams County Bank was organized with a state charter. Jesse Niblick was elected a director and the first president of this bank, and was later succeeded by R. B. Allison as president, he taking the office of vice president. Jesse Niblick was also identified with the organization of Eagle Manufacturing Company of Decatur. He was also prominent in local affairs, was a staunch democrat, was elected clerk of Washington Township in 1848 and until 1865 was either clerk or trustee of the township, sometimes holding both offices at once. In the fall of 1865 he was elected county treasurer and reelected in 1867. For many years from 1870 he held the office of village trustee or councilman.

Jesse Niblick married October 16, 1851, Miss Catherine Closs, a native of Germany and a daughter of John and Catherine Closs. Jesse Niblick and wife were the parents of eight children. The sons to grow up were William, John, James K., Charles and Daniel.

Mr. John Niblick has spent all his active life in the atmosphere of the business which was established by his father. He was born in Decatur in a home that stood on the public square January 8, 1853. He was educated in the local schools and early became identified with the store of his father. He has been president of Niblick & Company since it was incorporated in 1897, and his brother Daniel is the present secretary of the company. His niece Mary Catherine Niblick has for many years presided at some of the important departments of the store, and several of the many employees have long and faithful records of service and have contributed much to the prosperity, and importance of the establishment. It is no exaggeration to say that this is the largest mercantile enterprise of its kind in Adams County.

While the conduct of this store has absorbed Mr. Niblick’s best abilities, he has never neglected to contribute his resources and influence to the public welfare in every possible way. He is a director and member of the finance committee of the old Adams County Bank. This institution which was first started by the state in 1874 as above noted, was conducted throughout the twenty years of its first charter as the Adams County Bank. It was rechartered in 1894 and then became the Old Adams County Bank. In 1914 it was again chartered and during the more than forty years of its existence no depositor has ever lost a single dollar and the resources and integrity of the institution are unimpaired to the present time.

On May 18, 1876, Mr. John Niblick married Mary A. Studabaker. She was born in Decatur in 1855, grew up and received her early education there and in 1875 graduated from Glendale College, at Glendale, Ohio. The Studabaker family have been identified with Adams and Wells counties for fully eighty years, and their relations with banking, business, law and civic and social affairs give them an enviable prominence in the history of this locality. Judge David Studabaker was a cousin of the great family of Studebakers of South Bend, Indiana, though there is a slight variation in the spelling of the name. Judge David Studabaker in early life was a teacher, was admitted to the bar in 1852, was in active practice of law at Decatur over thirty years, and filled many offices, including prosecuting attorney, member of the legislature and senate and judge of the Court of Common Pleas. He was also a railroad builder and was long active in the Adams County Bank. His death occurred in 1894.

Mr. & Mrs. John Niblick had four children: Harrie E. married Arthur D. Suttles, now assistant cashier of the Old Adams County Bank. Mr. Suttles was well educated in the Decatur High School and Normal School, and for about eight years was principal of a ward school in Decatur and he has been connected with the Old Adams County Bank since 1907. They have four children, Mary, Josephine, Arthur D., Jr., and Helen. The second child of Mr. and Mrs. John Niblick is Josephine, wife of O. P. Edwards of Leipsic, Ohio. They have one daughter, Harriet. Burton S., is now bookkeeper in the Old Adams County Bank and married Bessie Nolan. Helen, the youngest child, is a graduate of Lake Forest College, studied at Mount Holyoke, is a graduate of the Ohio Wesleyan University at Delaware and took domestic science work in Chicago. She has been very active in local affairs at Decatur and especially prominent in Red Cross matters. The Niblick family are active members of the Methodist Church. Mr. Niblick is a democrat.

Regarding Angela to Eve, or Israel to Me, and the Family Tree:

From Charlemagne to Abraham. Some have 61 generations. The Gospel of Matthew states there are 42 generations between Jesus of Nazareth and Abraham, and Marcomir III (10BC-50AD), thirty generations from Charlemagne, would have roughly been Jesus’ contemporary. Thus there would theoretically be about 72 generations between Charlemagne and Abraham. The Springer genealogy inserts 24 Cimmerian kings in between the Sicambri kings and the Trojans for a count of about 85 generations. Some dates and details below come from Springer, where it seems appropriate. The dates don’t line up between Zerah and the Trojans, but in the bible the Hebrew word for “became the father of” does not necessarily mean only that, but often means “became an ancestor of”…the equivalent of our English word “descendant”. It’s quite possible that the Mergovian royalty discovered that the Trojans ultimately came from the line of Judah, despite missing information about all the intermediate generations.