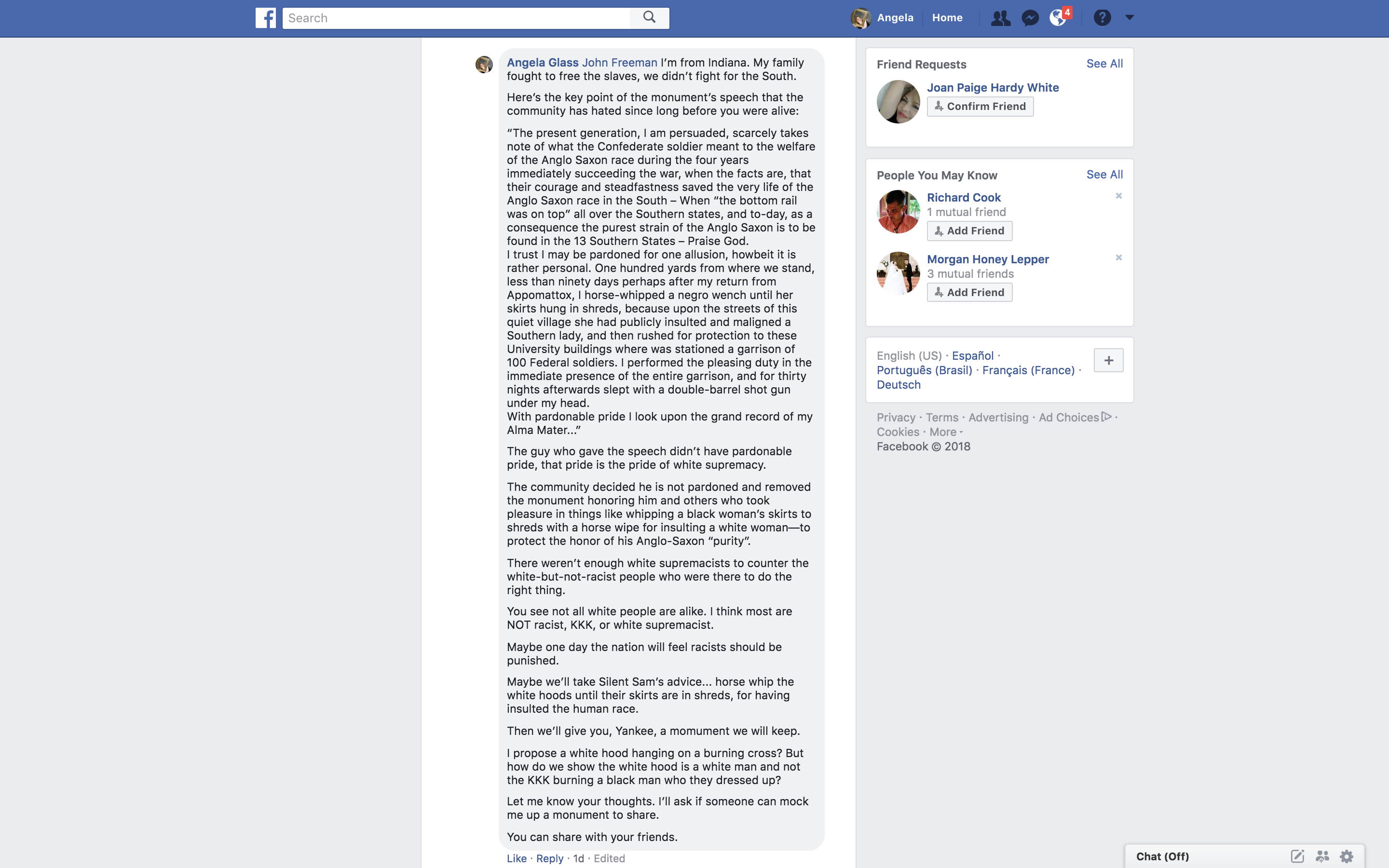 Angela, what planet do you live on???

I live on planet earth, third rock from the sun.

I looked up “radical”.

Yes, I would say I am “someone who advocates thorough or complete social reform”.

that was there pulling down a piece bronze statue…..

But, no I wasn’t there—I was in California—but I would be happy if my step-daughter, a brown skinned young woman at UNC, was there.

what are you plans next to exterminate all white men???

That’s called a Non Sequitur. Because I live on planet earth, and sound like a radical in North Carolina it doesn’t follow I’d want to exterminate all white men.

Why do you feel people want to exterminate you like you are a cockroach, ant, or other pest?

Do you hate your race that much???

My race? I’m part of the human race. I’m on of mankind. I’m a man too. I believe all men are created equal, and I believe that includes men of all genders… for example, I am a human, of mankind, a female, a woman. A black woman is also a man of humankind, the human race.

Did you know that “race” used to refer to people not by color but by who lined up at the line together and circulated the world through history?

“A race is a grouping of humans based on shared physical or social qualities into categories generally viewed as distinct by society.[1] First used to refer to speakers of a common language and then to denote national affiliations, by the 17th century the term race began to refer to physical (phenotypical) traits.” — Wikipedia

So only in recent history would you say that Ronnie and you are white men of one race, while you’d refer to his brother-in-law as another race.

Before you’d be in the race together… like a team. Ronnie and his brother-in-law at least. You might belong to another race or society of social qualities. For example, Ronnie and all the people in his family and all their children would be one clan. You’d be another. And, as case-in-point, Ronnie’s white, and his brother-in-law is black, but back then they’d be considered the same race.

What you’re (you + are means you need an apostrophe) suggesting is genocide of all white men? I didn’t know you all were feeling that guilty.

Genocide is the deliberate killing of a large group of people, especially those of a particular ethnic group or nation.

No, I wouldn’t kill all white men, and I don’t plan to.

Why are you afraid?

You can spew out all the stuff you want because it doesn’t justify tearing down a piece of history…..

Putting up a monument isn’t history.

What is history is the dedication speech—bragging about chasing down and beating a black woman because you feel like your ‘race’ is threatened.

The University of North Carolina is the first public institution in the nation.

Did it not occur to you that the boys that left UNC to fight in the war fought on both sides? END_OF_DOCUMENT_TOKEN_TO_BE_REPLACED